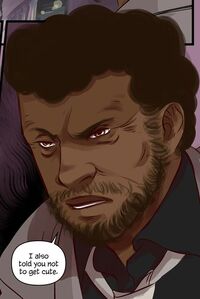 Should I put the word out that she's a pussycat?

Clay is a member of the Extrajudicial Operations Network. He blackmailed Baboushka to perform a job for them that the CIA wouldn't touch. An illegal rackateer was selling his business and they wanted to bankroll her to buy it for them.[1]

When Gryogy called in to inform him the deal was off since their contact was murdered, Clay pushed them and told them they still needed to fulfill their end of the bargain and retrieve the CIA data.[2]

Retrieved from "https://imagecomics.fandom.com/wiki/Clay_(Codename_Baboushka)?oldid=52105"
Community content is available under CC-BY-SA unless otherwise noted.