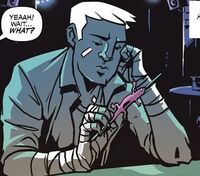 Clay is a private investigator in Dedande City. He arrived without any memories and suffered from amnesia.

He was approached by Bridgette to see if The Thumb was following her for any reason. While following the Thumb at a club, Clay captured footage of him exchanging money for drugs as the cities most powerful drug trafficker.[1]

However, when he attempted to review the footage, he was attacked by the Teleshaman. He was rescued by his roomate, Sandy, who used her voodoo to summon Papa Legba and rescued him from the Teleshaman.[2]

Later, Clay met with Bridgette at a diner. Bridgette was upset that the Thumb knew who he was and would soon find her as the one that had hired him. She gave Clay an address of a place to lay low while she sneaked a doll, with a listening bug implanted inside, into the Thumb's office. Clay went to visit Sandy but the two were suddenly attacked by the The Second Line, a mercenary group that uses audio as a weapon. They escaped to the safe-house that Bridgette gave them but it was soon compromised as well. The Second Line abducted clay. Sandy recognized Bridgette's name and knew who to go after when Clay was abducted by the drum line.[3]

When Clay later woke up, he found himself in a pit, fighting for his life. The Thumb unleashed an alligator and Clay was able to divert its attention to the crowd. The Thumb had to stop the alligator and was furious. He knocked Clay out and had him tied up and put in a room. When Clay came to, Bridgette walked in and revealed she had orchestrated everything only to let him go now. Clay was confused but didn't argue. He was pulled into the TV by the Teleshaman, who he thought had been killed. The Shaman informed him that Bridgette was powerful and wise as he let Clay go into the swamp. Clay was about to steal a boat to return home and escape the craziness, but he spotted an innocent man about to be eaten by the fishmen. Rather than selfishly leave, he stood up for the man and raised a spear against the fishmen who promptly retreated.[4]

Retrieved from "https://imagecomics.fandom.com/wiki/Clay_(Limbo)?oldid=55624"
Community content is available under CC-BY-SA unless otherwise noted.