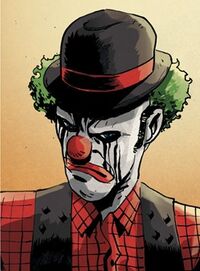 Walter Kenny moved to Buckaroo with his parents when Ed Warren was only six years old. His mother, Rose, had a sick obsession and hoped to escape it by moving to Buckaroo. However, she soon found her obsession had been passed down to Walter.

Walter became the Clown Car Killer and was obsessed with killing people and seeing how many he could stuff into a car. The police began investigating him and his parents killed themselves in a murder-suicide.[1]

Retrieved from "https://imagecomics.fandom.com/wiki/Clown_Car_Killer_(Nailbiter)?oldid=35284"
Community content is available under CC-BY-SA unless otherwise noted.