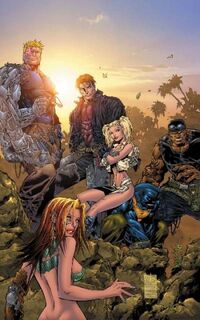 History of team is unknown.

Codename: Strykeforce was a comic book series by Top Cow/Image Comics, about a team of superheroes. It was an offshoot of another series called Cyberforce, which was about a group of cyborg shock troops. The series lasted for fourteen issues. The first nine were by Eric Silvestri and Marc Silvestri. The last five were written by Steve Gerber and illustrated by Billy Tan Mung Khoy, who also handled the two part Cyberforce/Codename: Strykeforce crossover, which ended with Stryker disbanding Codename: Strykeforce.

Relaunched in 2004 as Strykeforce. The relaunch was written by Jay Faerber and penciled by Tyler Kirkham.

Retrieved from "https://imagecomics.fandom.com/wiki/Codename:_Strykeforce?oldid=18339"
Community content is available under CC-BY-SA unless otherwise noted.