"The Conclave of Death, Part One" 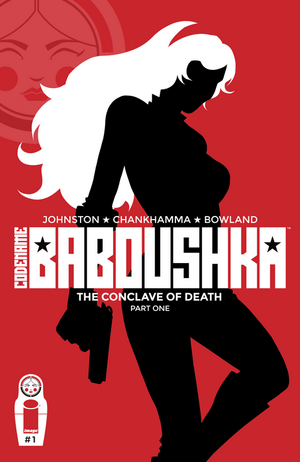 You might think I'm a hero, but that would be a mistake.

Appearing in "The Conclave of Death, Part One"

Plot Synopsis for "The Conclave of Death, Part One"

In the Andes Mountain Range, Goran Sablic meets with his illegal arms buyers. They celebrate another year of profitability. One of this men thinks about how he plans on killing him. However, the maid drops a wine glass and causes a disturbance. The butler walks in and ushers her out. Suddenly, Goran dies in his chair. The butler notices a puncture wound on Goran's neck. The men yell at the maid to stop and she dives behind a dish to pull out a gun and shoot her followers. She radios in that her name is Baboushka and wants to confirm they received the video feed from her glasses.

Gyorgy sits in a room in Manhattan, New York, monitoring her activities. He tells her has the proof of his death now. He asks if she needs help and she says she has it under control as another group of henchmen open fire on her.

Three weeks ago, Gyorgy was entering a fancy restaurant with Contessa Malikova. The crowd whispered about her purchasing the building. Suddenly, several men in suits approached their table. When they tell her to come with them, she hits a button that causes their ear peaces to overload and nearly knocks them out from the deafening feedback. A man named Clay walks out and apologizes for his men. He tells them it's a matter of national security.

As they enter the limo, Clay tells Contessa he knows she's actually Baboushka, a Mafiya boss, and wants to make a deal with them. He tells them he represents EON, Extrajudicial Operations Network. He tells them Bob Felton, an ex-CIA agent who now racketeers, is selling his business. He would never sell to them, but he would probably sell to her as a Mafiya boss. They offer to bankroll her. After he reveals her past with accuracy and that she can't go back to Russia as she would be killed, she agrees to help them.

In the present, security calls in the maid outfit as the target. She using dynamite earrings to escape from being held at gunpoint and jumps the electrified fence to escape.

Later on the Indian Ocean, Baboushka prepares to bid on the black market arms deal while several pirates prepare to board and take the ship.

CODENAME BABOUSHKA is an action-packed modern pulp spy thriller full of high-stakes thrills in exotic locations, with a kick-ass female hero in the style of James Bond and Modesty Blaise! Written by ANTONY JOHNSTON (THE FUSE, The Coldest City, Daredevil) and illustrated by SHARI CHANKHAMMA (SHELTERED, The Sisters' Luck). The enigmatic Contessa is a wealthy socialite, the last heiress to a noble Russian line—and secretly a deadly assassin! Blackmailed by the US government to carry out dirty jobs even the CIA can't sanction, she's got nothing to lose...and everything to fight for!

Retrieved from "https://imagecomics.fandom.com/wiki/Codename_Baboushka:_The_Conclave_of_Death_Vol_1_1?oldid=52102"
Community content is available under CC-BY-SA unless otherwise noted.