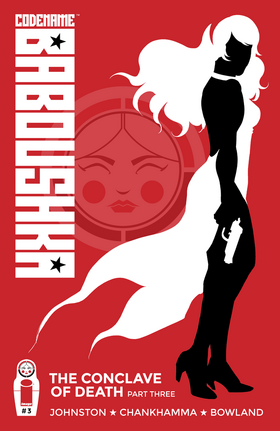 Good thing too. I'd hate to be a widower.

Somali pirates break into Baboushka's room after filling the room with bullets. They believe she is killed as they stand over her body but she wakes up and immediately knocks them out. She phones into Gyorgyov that the bulletproof armor came in handy. She has Gryorgy pull up schematics on the ventilation system. She sneaks through the ship using Gyorgy to instruct her on her earpiece. She overhears from the pirates they are looking for the Bob Felton's data as well. She realizes the Somali pirates are a cover for secretly looking for the data as well and wonders who they are working for. However, she is suddenly cut off from Gyorgy. The pirates activate a scrambling signal.

The leader meanwhile interrogates the secret bidders. They give him lip for not just bidding and taking such violent means to get to the data.

Gyorgy calls Clay to tell him the deal is off. With Felton dead there is no way they can retrieve the data. However, Clay pressures him and tells him the deal is not off and they need to scour the ship for the intel.

Meanwhile, Baboushka sneak through the ship and runs into Seamus Stirling. While they initially work together, he knocks her out and calls into the Somali pirates and gives them orders as he has secretly been their boss.

On the run and under siege! The odds are stacked against Baboushka, but there’s more to this situation than mere piracy—and she’s about to find out who she can really trust…!

Retrieved from "https://imagecomics.fandom.com/wiki/Codename_Baboushka:_The_Conclave_of_Death_Vol_1_3?oldid=74410"
Community content is available under CC-BY-SA unless otherwise noted.