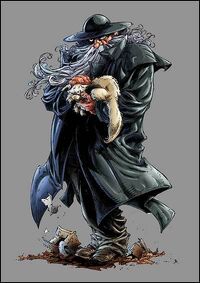 Cogliostro, or Cog, was once a hellspawn who gave up the way of Hellspawn to save the last of his strength to one day free himself. He saw Albert Simmons as his ticket to once day achieve freedom and mentored him how to use his powers.

In years past, Cogliostro was known as Cain, the first murderer. He murdered his brother Abel, thus killing 1/4 of the world population of that time, and since the beginning he never wanted to serve in Hell but to rule it.

He struck a deal with Malebolgia to become a Hellspawn and serve in his army. However, he feared his return to Hell when he would one day use all of his power and vowed to never use his powers again until he could figure out how to free himself of his curse.[1]

When Albert Simmons appeared in New York City, Cog first appeared to him as an alley bum in the Bowery Alleyways. There was more to him as he knew more about Spawn's situation than Spawn himself.[2]

Cog is the one who informs Spawn that his powers draw on a limited energy source, and that using it up will condemn him to eternal torment in Hell. He is the angel on Spawn's right shoulder, opposite the Violator, who exhorts Spawn to revel in death and destruction for its own sake.

Eventually, Cogliostro reveals that he was also a Hellspawn, having forsaken Malebolgia long ago, and refuses to use his powers; he has one "tick" of necroplasmic power left, and any use of any of his Hell-granted powers will end his Earthly existence. Still, that single bit of power has extended his lifespan to centuries, and he does not want the newest Spawn to fall to the darkness that spawned both of them.[3]

The Ruler of Hell

Cogliostro returned to Spawn and revealed that he was dying.[1] He was terrified of Hell's status ever since Spawn abandoned the throne after defeating Malebolgia.[4] It is then after this that Spawn reveals to Cog of his plan to turn Earth into a new paradise, by allowing Hell to invade. As the absolute rule of Hell, he could then remake the world in his vision.[1]

Spawn and Cog then travel to the deserts of Tunisia for permission from the Greenworld to transform Earth into Spawn's ideal world. They were suddenly attacked by the third Redeemer, Eddie Frank. After the battle, Spawn was abducted by a pair of giant demon scorpions as they drag him to Hell.[5]

Still in Tunisia, Cog was visited by Mammon who gives him the Box of Eden which Cog recognized. He walked to a nearby tree to hang himself so that he may finally return to Hell.[6]

Redeemer, now aware of what he did wrong, also traveled to Hell to help Spawn battle the demons. After a frustrating battle against Violator, Spawn summoned all the past Hellspawn before him to help him with the other demons and takes back the throne of Hell.[7]

Cog then ran to Spawn with the mysterious box told Spawn that this was what he needed to help him turn Earth into a paradise. Spawn opened the box which turned Hell into an Eden-like world and he saw his widowed wife, Wanda Blake. He relinquished the crown of Hell and ran to her. This was all to Cog's plan as he grabbed the crown to become to ultimate ruler of hell.[8]

After this act of betrayal, Cain decided to give Spawn "what he always wanted" and sent him to Earth back as Al Simmons without the Hellspawn symbiote attached to him.[9]

Cain has not been seen since but has been briefly mentioned, such as his plans of building a tower in Hell to pierce the Earth, or perhaps Heaven.Later issues seems to have retcon this betrayal as he helps the new Spawn Jim Downing and after Ressurection goes back to being an ally of Spawn again. However he returns to villainly again after murdering Nyx.

Cogliostro in the HBO Spawn series.
Add a photo to this gallery

Retrieved from "https://imagecomics.fandom.com/wiki/Cogliostro?oldid=67482"
Community content is available under CC-BY-SA unless otherwise noted.