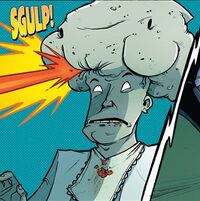 Dr. Conner Coulibiac worked for the U.S. Navy. When Sammy the Seal found some evidence he was not supposed to on Level E at the Yamapalu sea station, he was murdered. He was believe to have been murdered for this discovery. However, Tony Chu investigated the case and discovered he was murdered by Dr. Conner Coulibiac for eating his fish, which the doctor needed to feed his brain.[1]

Retrieved from "https://imagecomics.fandom.com/wiki/Conner_Coulibiac_(Chew)?oldid=52258"
Community content is available under CC-BY-SA unless otherwise noted.