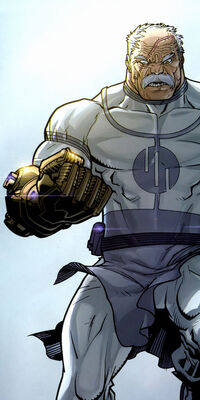 “I am Conquest. I have never failed to assimilate a chosen planet, no matter its strength. If you choose to oppose me, you will not survive.

Conquest was born on Viltrum and was one of the few Viltrumites who survived The Scourge Virus. After the infection left his system, Conquest found himself vulnerable and his strength greatly diminished. Arriving on a planet inhabited by The Rognarr, his right arm was ripped off, his face permanently scarred, and he was blinded in his right eye.

Conquest arrived on Earth to check on Invincible’s progress of taking over the planet. He stated that he would take over if he hadn’t made progress but would kill him if he resisted. Invincible told Conquest that he shouldn’t talk to him at that appropriate time. Conquest rebuffed him by stating that he was sent because he knew that he would resist. Invincible explained that he caused all the damage around him (in reality it was alternate versions of him) and that he wanted something to punch. He chargeed into Invincible and crashed him through a building into debris. Conquest told Invincible that he enjoyed battle, wanting him to fight back. Invincible got up and punched Conquest, tossing him through several buildings. Conquest moved the debris and grabbed Invincible by his neck. Invincible used his fists and hammered his temples. He continued to hit Conquest until they were in orbit. Conquest smiled and grabbed Invincible to bring him down. He stopped into the stratosphere after Invincible fought him off, stating he tried flying into him. Conquest punched Invincible, smashing part of his visor. He continued to pummel him into the ground. Invincible took a break and Conquest crashed into him, feet first. Conquest continued to attack him until Invincible stopped him by asking him to listen. Conquest, not wanting the battle to stop, continued to attack him. Their battle wass interrupted by Oliver Grayson.

Surprised by his interruption, he grabbed Oliver wanting to know who he was. Invincible intervenes and threw Oliver away from the battle. He pushed Invincible to the ground with his elbow on his neck. Invincible headbutted him and pummeled him with Conquest enjoying the battle. Conquest caught his next punch. He mocked Invincible and told him that taking over was too easy. Before Conquest smashed Invincible with his arm, Oliver interrupted. Hoping that Invincible would get up and start fighting, Oliver grabbed him. Conquest smacked Invincible away and punched Oliver while breaking his arm. He attempted to dismember Oliver’s body, but was interrupted by Invincible. Conquest assaulted Invincible crashing him through a cruise ship. Focused on the battle, he was interrupted by Atom Eve’s arrival. Invincible, hoping not get Eve involved, grabbed Conquest. Conquest broke Invincible’s leg and Eve attempted to hold Conquest in a force field. He shattered the bubble and attacked Eve, punching her. He then disemboweled her and threw her aside. He flew to Invincible, grieving over Eve’s death. Conquest told Mark he talks about how he doesn't get to cut loose often and wanted to thank him. Mark declared that he wouldn't see tomorrow.

Conquest laughed, asking him to do his worst. Conquest charged into Invincible and prepared to deliver a punch. Using enough power, Invincible destroyed Conquest’s cybernetic right forearm. Excited, he was distracted by his loss and Invincible landing a punch, separating breaking his radius and ulna bones. Conquest grabbed him in an attempt to bear hug him. Invincible bit Conquest, tearing a piece of his trapezius muscle. Invincible continued attacking him, but was surprising that Eve wasn’t dead. Eve blasted a wave of energy at Conquest, with him losing much of his skin. Conquest then attempted to finish the job, but was stopped by Invincible. Conquest caught one of Invincible’s punches and broke his hand. Invincible screamed in pain and headbutted Conquest. Invincible then proceeded to headbutt Conquest until his face was disfigured, believing him to be dead.

In order to get more answers about the Viltrumites, Cecil Stedman made a fake copy of Conquest’s body to show Invincible. He encased him in a 400 ton prison in the Mojave Desert. Days later, Conquest fully healed from his injuries and easily escaped into space. He then smiled and headed to a Viltrumite Warship. He reported to the Viltrumite Grand Regent, Thragg. He bowed to him at the request of Kregg He reported his failure to the Viltrumite Grand Regent. Thragg compared him to an animal and cited his failure for reasons to not let him live. Thragg forgave him and tasked him to return to kill Invincible, Nolan. and anyone who is assisting in the Coalition cause.

Conquest led the charge against the Coalition with Lucan and an unnamed Viltrumite. Conquest had ran through a Coalition spaceship and readied himself for battle. He revealed himself to Invincible, believing him to be dead. Oliver charged for Conquest, only to be slapped away. He was then charged into by Nolan, but Conquest recovered. He grabbed Nolan and headbutted him. Invincible interrupted and pummeled Conquest. Conquest smacked him away and charged towards him. Invincible asked how he was still alive. He revealed that he was imprisoned and had escaped. He punched Invincible and was punched back after a Viltrumite impressed alien race had arrived. Oliver, realized that he couldn't hold his breath for long, headed to an unknown planet. Conquest punched Invincible again and headed after Oliver. However, Invincible caught up to him and grabbed him. They crashed into the ground with Invincible attempting to suffocate Conquest. Attempting to break his hold, Conquest would fly into space and flew to various mountains. Realizing he won't let go, He punched Invincible and disemboweled him. An injured Mark doesn't let go and Conquest is suffocated to death.

Retrieved from "https://imagecomics.fandom.com/wiki/Conquest?oldid=67137"
Community content is available under CC-BY-SA unless otherwise noted.