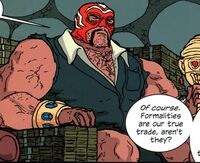 El Conquistadori is a Catalan prince. He is the Head of the Secret Global Banking Cartel, and part-time junior heavyweight luchador champion. His finishing move is the Debtor Nation.

El Conquistadori was a rich and powerful banker for the Freemasons. He sat on the council with Harry S. Truman when the decision was made to eliminate the Manhattan Projects.

While chaos was about, he sneaked into Containment Area Alpha to locate the Gateway that Einstein was working on. When he was ambushed and forced to hand over all of the money to Einstein and Richard Feynman, he was granted his wish of the Gateway and pushed through it into outer space by an Einstein side-kick. His body imploded from the atmospheric pressure change.[1]

Retrieved from "https://imagecomics.fandom.com/wiki/Conquistadori_(The_Manhattan_Projects)?oldid=25158"
Community content is available under CC-BY-SA unless otherwise noted.