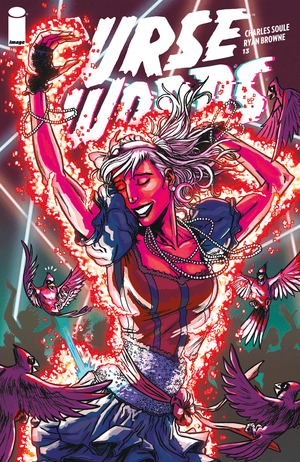 "THE HOLE DAMNED WORLD," Part Three It's the social event of the season! Ruby Stitch is throwing the biggest shindig New York City has ever seen, a true wizard party—consequences be damned! Meanwhile, Margaret is making friends in prison, and the demon Sizzajee reveals a fundamental, shocking truth about the nature of the Hole World.

Retrieved from "https://imagecomics.fandom.com/wiki/Curse_Words_Vol_1_13?oldid=67730"
Community content is available under CC-BY-SA unless otherwise noted.