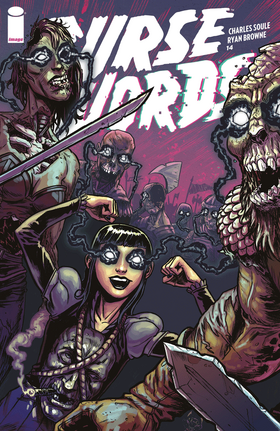 "THE HOLE DAMNED WORLD," Part Four WAR! Battle erupts in the Hole World as we see the fearsome capabilities of the fearsome warriors of the fearsome Tiger Tribe. Sizzajee's crew of evil wizards is down to only four members—will they be able to successfully defend his realm? ALSO: Wizord and Ruby Stitch continue their search for Margaret, and Jacques Zacques goes batty.

Retrieved from "https://imagecomics.fandom.com/wiki/Curse_Words_Vol_1_14?oldid=67707"
Community content is available under CC-BY-SA unless otherwise noted.