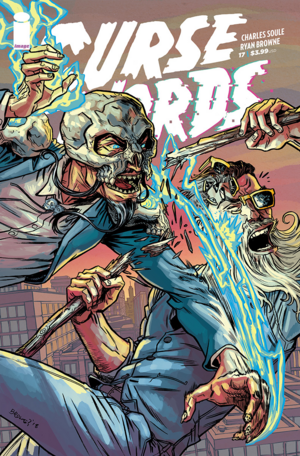 “THEM BLUE WIZARD BLUES,” Part Two After his epic defeat in the last issue, Jacques Zacques has realized that winning a magical duel isn’t quite as easy as snapping your fingers and saying “abracadabra.” He’s off to wizard school! Meanwhile, Margaret seeks the truth, and Wizord and Ruby get caught up in the hottest new show of the season. Offered with yet another “magical” variant cover!

Retrieved from "https://imagecomics.fandom.com/wiki/Curse_Words_Vol_1_17?oldid=67754"
Community content is available under CC-BY-SA unless otherwise noted.