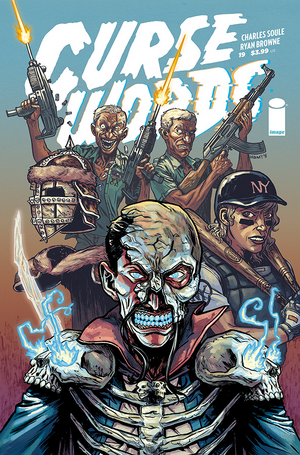 “THEM BLUE WIZARD BLUES,” Part Four Jacques Zacques strikes! During his time in our world, Wizord has made some pretty powerful people pretty angry. It’s time for them to get their due, via a surprise attack. A truly action-packed installment of the ongoing gonzo fantasy, offered with another “magical” variant cover!

Retrieved from "https://imagecomics.fandom.com/wiki/Curse_Words_Vol_1_19?oldid=67757"
Community content is available under CC-BY-SA unless otherwise noted.