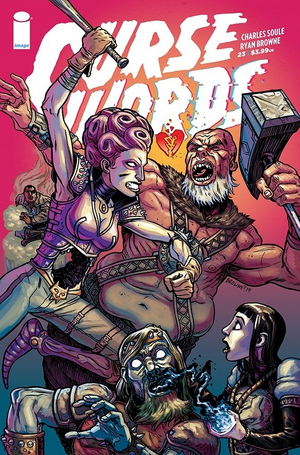 “FAIRY TALE ENDING,” Part Three We’re coming up on the big finale, so we’re pulling out all the stops. The magical battles we’ve seen so far are nothing compared to what we get here, as Sizzajee and his reduced crew of evil wizards battle the powerful Tigers for the fate of the Hole World while Wizord and Ruby Stitch try to save their daughter’s life. And speaking of Margaret… what’s her deal, really? Let’s find out… together!

Retrieved from "https://imagecomics.fandom.com/wiki/Curse_Words_Vol_1_23?oldid=67741"
Community content is available under CC-BY-SA unless otherwise noted.