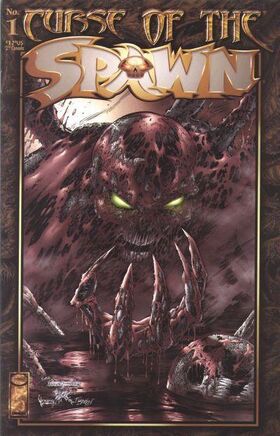 Original Price:
1.95
Previous Issue
Next Issue
—
Curse of the Spawn #2

400 years in the future after Albert Simmons' death, the Armageddon war is about to begin. The Anti-Pope has setup his stronghold in Nu-Vatican City and prepares his forces of darkness to move. His demon general, Abaddon, crushes bone and rips through flesh as no servant of God is allowed to live.

A woman named Madrid, and her son, Matthew, are chased through an apocalyptic landscape by Necro-Soldiers. They are barely able to defend themselves with their futuristic weapons. Desiccator chases them announcing he wants to consume their liquids as it is this age's new precious commodity.

Daniel Llanso is suddenly reborn as the new Hellspawn. He is confused with memories of his abusive and murderous childhood. He receives vivid flashbacks as Desiccator closes in for the kill. Daniel unleashes his rage on Desiccator, freeing Madrid from her pursuer. However, Mardrid is now terrified of what this new Hellspawn can do and demands he keep her distance from her as he grasps for a hold on reality.