"A Fall Of Doves" 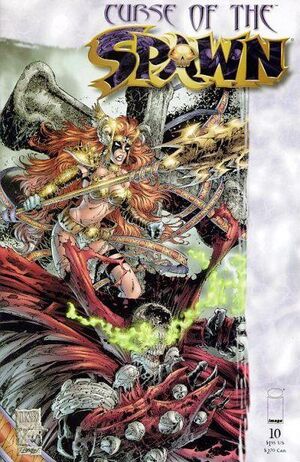 Appearing in "A Fall Of Doves"

Plot Synopsis for "A Fall Of Doves"

The Argus explodes activating the Kron. It creates a rift in time and space threatening to implode the universe and all creation. In a position of weakness, Angela jests that now is the time to give up before she destroys them. As she is sucked into the singularity she sees Deurges once more.

She has a flashback to when she met Katherine in the Hall of Light. Katherine showed her how Elysium was the nexus of time and did not necessarily reflect time in a straight line as she could see the carapace of a Hellspawn she had killed in the future. Soon a mysterious woman takes Angela and explains emotions to Angela. Emotions know nothing of time and are embodied by women. Women act as containers that need to occasionally unleash the emotional element. She discusses how the fire is stoked by anguish, and even life itself is born out of anguish. She explains to give birth to the universe, another child, she must destroy those who stand atop it, namely Deurges.

Katherine warns Angela to never back down against darkness.

Snapping back to the present, Angela is sucked into the singularity and spit out in Rat City. Upon finding Spawn, she warns him of the impending doom that is coming to the world as a singularity has been created. Spawn remains unmoved and apathetic to her cause.

Elsewhere in the alleys, Cogliostro spots Deurges walking about. Deurges tells Cog his days as his jailor are over and attacks him.

A sudden bolt from the skies strikes the Terran Affairs Headquarters splitting it in half.

Retrieved from "https://imagecomics.fandom.com/wiki/Curse_of_the_Spawn_Vol_1_10?oldid=53671"
Community content is available under CC-BY-SA unless otherwise noted.