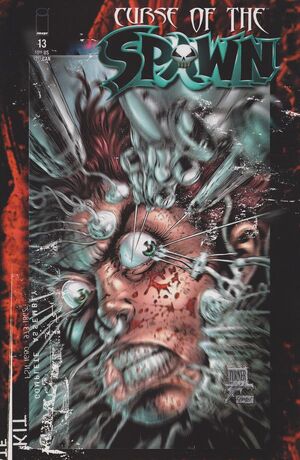 Appearing in "Heart Of Darkness"

Plot Synopsis for "Heart Of Darkness"

As Liz Arno and Kevin Bergregor continue their cruel tests on Jessica Priest, she cracks up with hysterical laughter. The duo discuss their goal to destroy the world with Heat-16 and then rebuild man with their genetic testing.

When the scientists aren't looking, Jessica pukes up a capsule she had stowed in her belly. She throws it against the wall causing an explosion. Jessica hurries in the confusion to grab the Heat-16 and escapes into the jungle with it.

The scientists realize they've been robbed and release the genetically modified Obersmith and Zacks, who now resemble dogs, to hunt her down and kill her.

As Jessica escapes she encounters a small village in the Jungle where she sees Juuko again. After admitting he set them up for money,[1] several troops appear and knock her unconscious.

Obersmith and Zacks trace Jessica's scent to the remote village and find Juuko. They shred him alive and consume his flesh to regenerate their own. As the villagers respond to the cries, soon they are all consumed by the generic beasts.

Jessica Priest wakes up to find she is held prisoner in a mine. Erlich Westerlin announces they will dig for uranium so that he may sell it and become rich.

Retrieved from "https://imagecomics.fandom.com/wiki/Curse_of_the_Spawn_Vol_1_13?oldid=53681"
Community content is available under CC-BY-SA unless otherwise noted.