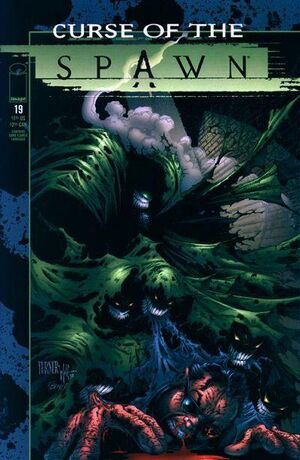 Appearing in "Curse The Curse"

Plot Synopsis for "Curse The Curse"

The Curse offers the location of the pursuing Vatican Secret Police member to Twist in exchange for information of who the insider Templar may be.

Elsewhere, Vincent D'Egallo sews himself up with minor surgery after the explosion.[1] With his shirt off he looks at his Order of the Knights Templar tattoo in the mirror. Cogliostro breaks in and demands to know what the Knights Templar are doing in the city. He warns them it is too dangerous with Deurges loose. Vincent tells him he has his orders, dresses, and then leaves.

Twist blows up the building where Keene was held. In exchange for his help, Twist give The Curse the name of his second in command, Vincent.

The Curse kidnaps Vincent and prepares him for surgery. The Curse wants to determine how he gets his holy powers. The VSP break in and stop the Curse, but are too late to save Vincent.

Retrieved from "https://imagecomics.fandom.com/wiki/Curse_of_the_Spawn_Vol_1_19?oldid=68186"
Community content is available under CC-BY-SA unless otherwise noted.