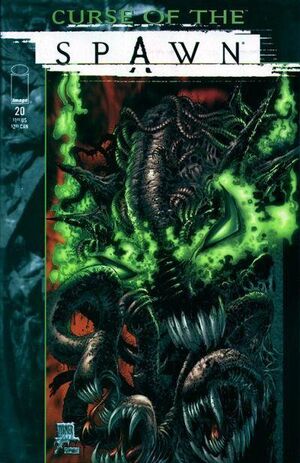 2,000 years before Christ, in the time of Zeus and the Greek Gods, a Hellspawn Raenius emerges from an unknown place called Hell. Raenius was bastard child of Cronus and a mortal woman named Ariena. When Cronus heard of his impending doom from his children, he swallowed them all hole.

Raenius was secretly sent to live with the Centaurs where he learned to hunt and survive. The new Hellspawn battles his way up from the underworld through the waters of Oceanus, determined to reign in place of Zeus. Meanwhile, on Mt. Olympus, Zeus senses the threat of the new Hellspawn and prepares for the impending battle.

Retrieved from "https://imagecomics.fandom.com/wiki/Curse_of_the_Spawn_Vol_1_20?oldid=53708"
Community content is available under CC-BY-SA unless otherwise noted.