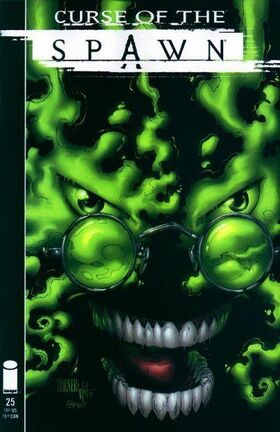 Appearing in "Heart Of Hell"

Plot Synopsis for "Heart Of Hell"

Harley listens to music and suddenly has a vision of a demon who tells him he a Hellspawn. He turned on Kiss to ignore it.

The next day, Harley's father wakes him out of bed. His parents rag on him about his grades slipping. He heads to school and is hounded by the demon again. It begs him to kill someone. He find to the bathroom to puke and choke down more medicine.

Later, he finally works up the gall to ask out Kelly. He's dejected to learn she's already been asked out by his friend, Travis. He losses it on Travis in the parking lot and his friend takes off mad.

At work, his boss rides him about doing the wrong things. When he is haunted by his demon to kill his boss he turned up his music to drown out the impulse.

Later, two men attempt to car jack him. When Harley is shoot, he transforms into the demon and rips out the assailants jaw.

Tasting the power, Harley heads into town to find Travis and Kelly. He rams his car into theirs. He begins attacking innocent by standers and rips their heads from their shoulders.

Kelly runs home as Harley murders her friends. She arrives home to find the hellspawn killing her parents. She calls down when Harley transforms back to his regular self.

When Harley wakes up the next day, he finds he murdered Kelly while asleep.