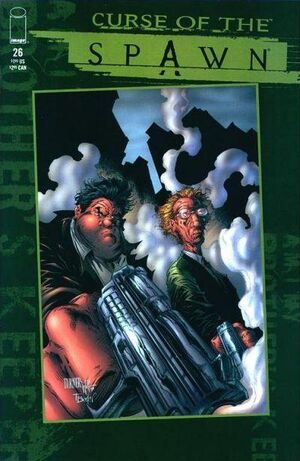 Screw mercy. Drop a couple grenades down there. Problem solved.

Margaret Eschens is a wealthy entrepreneur who barks orders at others and preoccupies herself with greed. Her limo suddenly swerves of the road to avoid hitting Travis Quinn. Travis had into the ravine below to retrieve her.

Later, Margaret wakes up to find Travis lurching towards her. He claims to want to repair her soul. Margaret attempts to flee.

Later, Sam Burke and Twitch Williams arrive at Fenton Sanitarium. Sam remarks that the place is disgusting and a few grenades would tidy the place up. Dr. Carl Marsh gets them and informs them he is offering a large fee. A recent patient, Roger Bonner, was released and he afraid he will be charged with murder for crimes he didn't commit.

Zender calls in a limo murder. Says he will need help with investigation.

In Washington, D.C., Marc Simmons finds the Unknown Soldier has murdered everyone in the building. He attempts to negotiate and feigns surrender but ends up taking Mitchell's life. As a psychiatrist, he mourns the loss of a patient he couldn't save. He gets a call that he is needed in New York.

On the plane ride over, he's haunted by visions of past failures. Upon arriving, he's told his number one lead if Roger Bonner.

Sam and Twitch arrive at Roger Bonner's apartment. They're disgusted to see dead rats and cats strewn across the place. Suddenly Marc Simmons bursts into the place to arrest Bonner.

Meanwhile, across town Travis Quinn grabs a family to murder.

Retrieved from "https://imagecomics.fandom.com/wiki/Curse_of_the_Spawn_Vol_1_26?oldid=42838"
Community content is available under CC-BY-SA unless otherwise noted.