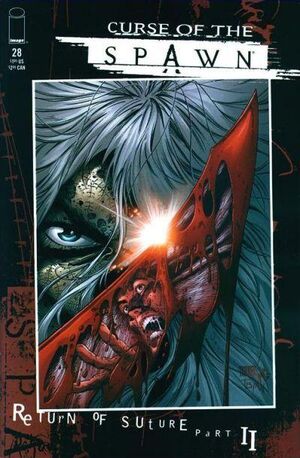 Suture perches high above New York City on a building. She wonders if this life of here for any good.

In Long Island, Dr. Ian Sanders lives a successful and wealthy life as therapist and talk show radio host. He drives his vehicle to an storage facility where he had store his 22 women he murdered in jars. Suture surprises him and take him away.

Upon arriving home, Sanders is attested as the police found his car at the storage facility.

Retrieved from "https://imagecomics.fandom.com/wiki/Curse_of_the_Spawn_Vol_1_28?oldid=42840"
Community content is available under CC-BY-SA unless otherwise noted.