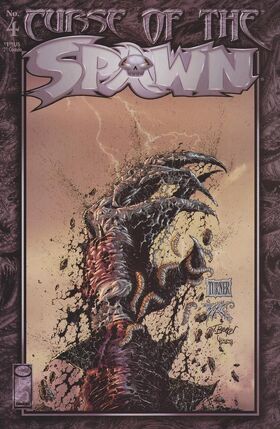 As Daniel Llanso rushes to Madrid's aid, he is attacked by a demon. He used his gun to conserve energy and causes a landfall to knock the beast down.

At the humans' camp, they are suddenly ambushed by the Navkies. Mortemeure turns to Matthew and blame him believing he lead evil to their sanctuary. Abel sneaks in and grabs Matthew during the commotion. His eyes flow yellow and he tells him it's time for his baptism. Llanso arrives and beats back the Navkies. Darro breaks into the room and announces that maybe was taken and Abel has turned.

Spawn and Madrid set out to rescue Matthew. Bune attacks them as they leave. He is furious they killed the Navkies, his children. Spawn disables his scythe and uses it against him to kill him.

Angel drags Matthew to a tower made of human bones. He is dragged upstairs in preparation for his baptism. Abaddon waits at the top as the boney hands pass Matthew up to the top of the tower.

Daniel arrives at the top and offered a choice by abaddon. Kill Matthew and saved his soul, or his will be eternally damned by the baptism. Spawn transports Matthew to his mother and Abaddon curses at Daniel. Spawn sacrifices himself in a necroplasm exploitation killing the demon.

As Spawn races to rescue Madrid and Matthew, he is attacked by the demon chasing him, whom he eventually kills. Meanwhile, the Navkies attack the school. As Matthew runs to the auditorium, he is captured by Abel and taken to the tower. Madrid fights the Navkies with Siv and Flachette, and is saved by Spawn. After being expelled from the school, Madrid, Siv and Flechette race to the tower to save her son. Along the way, Bune attacks Spawn, only to be destroyed. At the tower, Spawn takes Matthew and warps him to his mother, and then kills Abaddon.