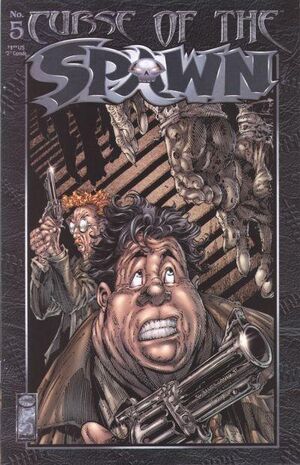 John Mawbley sits in a small diner in Hell's Kitchen. He pulls out hidden guns and execute everyone in the shop.

Sam Burke and Twitch Williams arrive at the murder scene where the detectives give them a hard time for being P.I.'s They find the victim was sawed in half with a chainsaw and had a rise placed where his decapitated head would be located. They are informed, "rose" is written in blood and is the 4th victim they've found like this. The body is identified as Hillary Reece, one of Sam and Twitch's clients. Sam explains they were investigating her husband who was a member of a sex humiliation cult, where people defecate on each other. After refusing to give more information, Detective Edland scolds then saying they are a disgrace to the badge.

As they take off in their Crimemobile, they nearly run over the attractive Gretchen Culver. She was walking to a nearby coffee shop. As she turns the corner, she sees Mawbley extracting the eyes of recently murdered patrons. She escapes and runs into traffic and is run over by a police vehicle in her stupor. Meanwhile, news and crowds gather around the coffee shop murders.

At a deli, Twitch bemoans their new job to Sam. He's worried about bringing value to the world and putting food on his family's plate. Outside, the ambulance with Gretchen drives by.

Inside, Sergeant Doug Halliday pulls them over a instructs his men to rape Gretchen while she's knocked out. The new cop on the street, Kenny Osbourne, starts to feel uneasy. When Gretchen wakes up and starts fighting back, she pulls the officer's gun and shoots officer Michelli's fingers off. They kill her and decide to hide the body. They take her to Jeremiah Euden, a dedicated body dumper.

Retrieved from "https://imagecomics.fandom.com/wiki/Curse_of_the_Spawn_Vol_1_5?oldid=53637"
Community content is available under CC-BY-SA unless otherwise noted.