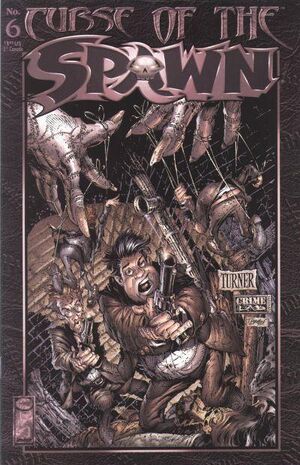 Appearing in "Blood And Rain"

Plot Synopsis for "Blood And Rain"

Wayne Tannanger stops by Sam and Twitch's Private Investigators Office. He tells them his fiance, Gretchen Culver, has gone missing.

Meanwhile across the city, several civilians are murdered by an unseen assailant. Their bodies are jarred and mummified.

The New York City Police Department show up to investigate the killer outbreak. They learn several of the victims have been under surveillance as potential serial murders and child molesters. Their bodies were found sewn together and hung like marionettes. Sam Burke asks about Gretchen and Ray Sparks points out the missing woman could have to do with a Jane Doe that was hit near the coffee shop the other day.[1] Detective Edland laughs and says he won't try too hard to stop a killer who only kills killers.

Sam and Twitch Williams approach Officer Deke and ask if he knows anything about Gretchen. He feels cornered and claims she was dead on arrival. Twitch and Sam then had to the morgue to check on the files and find she was buried earlier than protocol. Meanwhile, Sergeant Doug Halliday watches the duo get too close to the truth.

Wayne Tannanger requests the body be moved to his family's mausoleum. Twitch contemplate having the body re-examined based on the strange circumstances.

At a movie theater, John Mawbley prepares to make his move and kill again, but is suddenly attacked by Suture.

Later, the detectives arrive. Sam pulls Ray Sparks aside and tells him that something fishy is going on. The exhumed grave of Gretchen has no body in it.

Retrieved from "https://imagecomics.fandom.com/wiki/Curse_of_the_Spawn_Vol_1_6?oldid=53642"
Community content is available under CC-BY-SA unless otherwise noted.