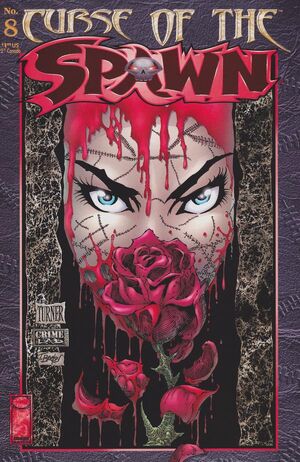 Appearing in "Carnival Of Souls"

Plot Synopsis for "Carnival Of Souls"

Kenny Osbourne confesses to the rape and murder of Gretchen Culver at Sam and Twitch's Private Investigators Office. Sam Burke and Twitch Williams start walking him to a police station to get an official confession when an unmarked sedan pulls up and start shooting at them, taking out Kenny and Mr. Tannanger. Sam and Twitch are winged in the process as the vehicle pulls away. As Tannanger takes in his final breaths, he hands Sam an engagement ring box and tells him to give it to Gretchen.

At the Police Station, Donna Weaver asks if they can bring forth any hard evidence against Suture. When they can't muster anything concrete, she tells them to cut her loose. Shortly after, Suture starts attacking the officers and taking out bad cops. She makes her way to Doug Halliday and the cops that murdered her and starts taking them out.

Halliday escapes and makes it to a police vehicle to take off. Suture jumps on the roof of the vehicle and forces him to crash at a nearby carnival. Sam and Twitch are hot on her tail in their Crimemobile. When they catch up, they see Halliday's body mutilated and already hung like a marionette. Twitch hands Suture the engagement ring box and she sob's at the life she has lost. She disappears like a phantom.

The news stories are spun so that the officers appear to be victims of a tragic serial killer. Twitch finds satisfaction in his job now as he can see the good he helps with finding closure for people.

Retrieved from "https://imagecomics.fandom.com/wiki/Curse_of_the_Spawn_Vol_1_8?oldid=68181"
Community content is available under CC-BY-SA unless otherwise noted.