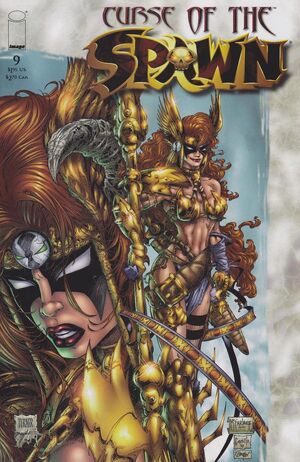 Angela continues her free-lance contracts on planets after quitting her job on Elysium and giving up Angel status.[1] She finds little satisfaction as she feels her true purpose is hunting Hellspawn. She is distracted upon seeing the specter of death, Deurges.

Angela has a flashback to five individuals. Ashra from Egypt, Sarah from Germany, a bushwoman from Africa, Kayla a black slave from the southern United States of America during slave times, and Evelyn Weathers from London. All innocent women who attempted to or could not saved their loved ones from dying. Each saw a vision of Deurges before being taken by Angels into Heaven. In a moment of pure-light out of God's pulse, Angela was born.

Snapping back to reality, Angela prepares to fight off the Argus from killing her.

Retrieved from "https://imagecomics.fandom.com/wiki/Curse_of_the_Spawn_Vol_1_9?oldid=53665"
Community content is available under CC-BY-SA unless otherwise noted.