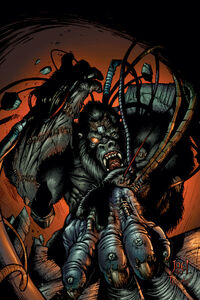 Michael Konieczni was Al Simmons' friend and squadmate. When he discovered the truth about Al's murder, he attempted to blow the whistle on Jason Wynn. However, he was stopped and subjected to project Sim, the Simian experiments of Frederick Willheim and became the beast known as Cy-Gor, short of Cybernetic Gorilla.[1]

As a part of Project Sim, Frederick Willheim was secretly working on a way to save his wife, Anna Willheim, with brain transplants. Frederick learned brain transplants were possible and attempted an 80/20 transference when he created the monster that desires flesh, Cy-Gor.[2] Due to an accident, Cy-Gor started out at 80% gorilla instead of 80% human. This was a mathematical accident by Willheim in his programming.[1]

Upon freeing himself, Cy-Gor headed towards New York City following his animalistic instincts.[3] He wanted to kill his creator, who he believes to be Al Simmons. Cy-Gor tracked Simmons to New York City based on his aura. Upon finding Spawn, he was bested by the creatures of the darkness and was suffocated and knocked out.[4] Spawn initially began performing checks on his cybernetics when he was called away to help Cyan Fitzgerald who was recently kidnapped. Cy-Gor was retrieved by the military searching for Spawn and Cyan and transported to Norristown Containment Facility[5]

Cy-Gor was experimented on by Werner Zevon and Mortie who attempted to reboot him. However, the electricity went out at the time of the mind transfer and Cy-Gor escaped. As he stumbled about following his instincts, he turned a gypsies monkey into a cybernetic monkey,[6] beheaded the death cult God Kali to become the new leader,[7] and murdered a mad artist who framed live people as a form of art.[8] He eluded capture from Werner and Mortie and boarded a plan for Serbia.[9]

Retrieved from "https://imagecomics.fandom.com/wiki/Cy-Gor?oldid=65983"
Community content is available under CC-BY-SA unless otherwise noted.