"Then One Foggy Christmas Eve" 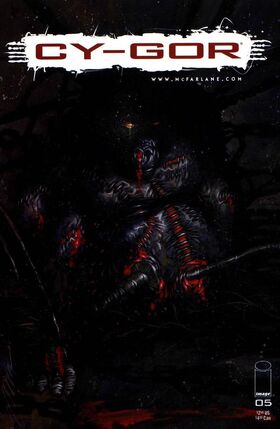 Appearing in "Then One Foggy Christmas Eve"

Plot Synopsis for "Then One Foggy Christmas Eve"

Werner thanks Mortie for saving him in sewers. He thinks Cy-Gor didn't attack him because he saw Lucienne and hates doctors more.

On Christmas Eve, a boy sneaks downstairs to see his presents. He turned around and it's startled to see Cy-Gor standing there.

Outside trips surround the building but Mortie orders them to stand firm as he doesn't want a Christmas massacre.

Cy-Gor had visions of when he was called in to help Albert Simmons on a mission before he became an Ape. He cries on a rooftop thinking of the memories.

Cy-Gor inadvertently activates an experimental military bouy when decorating it with Christmas bulbs. It releases the hallucinogenic fog upon the unsuspecting masses. Werner and Mortie find the buoy and disable it. They figure most people will wake up tomorrow and just think they drank too much.