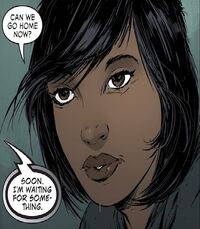 Cyan Fitzgerald was the innocent and wide-eyed daughter of Wanda Blake and Terry Fitzgerald. She was frequently an emotional sore-spot for Albert Simmons as he had tried to have kids with Wanda unsuccessfully.

When her father was diagnosed with cancer and Spawn came to visit him, he took his shoelace that had sewn his head shut for years. The shoelace became a comfort item for her and was tied around her pacifier giving her comfort.[1]

When Jason Wynn did not move fast enough to cause harm to Cyan's family, Violator kidnapped young Cyan to scare her parents, Spawn, and Wynn into battle. The plan backfired as Spawn was filled with rage for putting his family in harm's way and temporarily destroyed Violator with his Necroplasm. Cyan was returned to her family safely.[2]

Over the next few weeks, Cyan freaked out whenever she was separated from her shoelace. When Shanna took the pacifier she cried until it was returned.[3] When Wanda Blake drove Cyan Fitzgerald down a busy highway, Cyan accidentally lost her pacifier out the window. Cyan screamed blood murder until Wanda was forced to pull over. Cyan then leapt out of the car to retrieve the pacifier. Wanda began to worry about her daughter and the pacifier.[4]

Cyan Fitzgerald was brought to a children's psychologist for all the tantrums she had been throwing recently.[5] The psychologist agreed to see her.

Due to Spawn's negligence in participating in the war between Heaven and Hell, Cyan found she was being haunted by Mammon.[6] 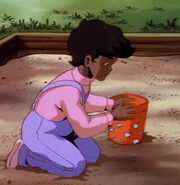 Cyan on the HBO Spawn Series.
Add a photo to this gallery

Retrieved from "https://imagecomics.fandom.com/wiki/Cyan_Fitzgerald?oldid=56189"
Community content is available under CC-BY-SA unless otherwise noted.