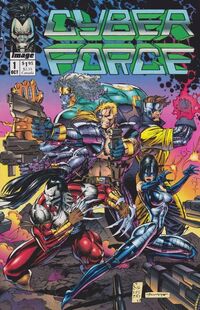 Cyberforce is an Image Comics super-hero team created by Marc Silvestri in 1992. Silvestri would begin performing both the plotting and pencilling chores, but the series was subsequently drawn by other artists, including David Finch. The title was originally published through Homage Studios, a studio Silvestri shared with Jim Lee, as a 4 part mini-series (Volume 1, 1992-1993). Soon afterwards, Silvestri formed Top Cow Productions and Cyberforce received a regular monthly series (Volume 2, 35 issues, 1993-1997), the first few issues crossing over with WildC.A.T.s for the "Killer Instinct" story. Since then, Cyberforce has been published by Top Cow.

The comic-book focused upon a team of mutants who had all at one point been captured by Cyberdata, an enormous corporation with ambitions of world-takeover. Cyberdata was run by brilliant scientists who had created advanced cybernetics technology and had employed this technology to create "Special Hazardous Operations Cyborg" or S.H.O.C.s. The captured mutants were all used in the experiments that had lead to the creation of the S.H.O.C.s, and had had their mutant abilities enhanced with cybernetic implants. The mutants escaped and banded together as Cyberforce to put an end to Cyberdata's plans. One of the lesser successes of the first wave of Image Comics, Cyberforce received the same heavy criticism that most of the other titles did. Many pointed out that the characters from Cyberforce bore strong resemblances to Marvel characters, with Cyblade being very similar to the X-Men character Psylocke. Additionally, there were many complaints of the large amount of violence in Cyberforce, as well as the highly sexualized female characters. Cyberforce gradually faded away, with Ripclaw (arguably the most popular and recognizable character from the series) making occasional guest appearances elsewhere, most notably in Silvestri's series The Darkness.

Recently, the series has been resurrected with moderate success (oddly titled as Cyberforce Volume 2 again, when it should be Cyberforce Volume 3), written this time by Ron Marz and penciled by Alex Milne / Pat Lee.

Cyberforce recently finished the first story arc since their reintroduction. The group had returned from their final mission and was affronted by the new threat of their alien forebears. The group has established a new base and a new look, as well as some further changes to their inner workings, for instance, bringing back Heatwave from the dead, as well as reintroducing both Stryker, (as a side character at the moment) and Impact]/Boomer, both of whom had left the group. At Impact's reintroduction, he stated emphatically that he wasn't interested in continuing his involvement in the team, as it wasn't "What I wanted. I never wanted any of this, not the strength or the invulnerability." He was won over by Ripclaw's promise to buy him a chocolate colored Labrador. Impact was subsequently killed off at the summation of the story arc. The group then decided that they owed it to Impact/Boomer, to continue in their heroic ways against an unspecified threat. Minor character arcs have begun between Ripclaw and Velocity, despite their age difference, as a romantic storyline between the two. Velocity, clearly of a minor age in the first series, is drawn considerably more adult in this second series, presumably to alleviate any concerns about inappropriate intimacies.