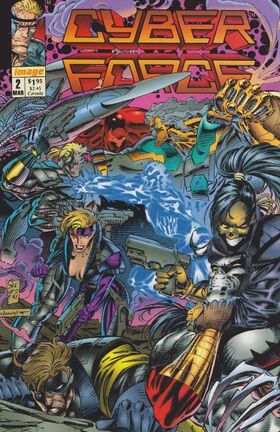 The S.H.O.C.s chase Velocity through the corridors of Cyberforce’s robotics facility, determined to capture her.  Cyberforce arrives and battles them until Ballistic orders a retreat.  The S.H.O.C.s teleport away.  With the facility’s location compromised, the team and its founder, Dr. Gregory Corben, set it to self-destruct and evacuate the next morning. Later, FBI agents visit Stryker at the main Cyberforce base below a Westchester County gas station.  They ask him to infiltrate Mother-May-I’s mutant terrorist group.  In the city, mutants Slam, Splitzkrieg, and Wyldfyre steal data discs from the company Megasoft. As they drive down the street, they almost hit a boy who runs in front of their van.  The boy happens to be Timmie, out grocery shopping with Velocity.  The mutants take both of them hostage, steal their van, and drive away until they are stopped again, this time by the S.H.O.C. Psychotron.

Retrieved from "https://imagecomics.fandom.com/wiki/Cyberforce_Vol_1_2?oldid=70446"
Community content is available under CC-BY-SA unless otherwise noted.