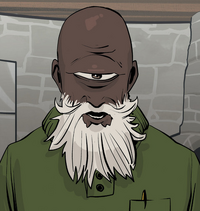 D. Oswald Heist is a member of the Cyclopean race and a famous novelist from Quietus. Heist is most popular for his book In Lieu of Flowers, but also wrote the novel A Night Time Smoke.

His writing secretly communicated that there was an opposite of war and two sides could come together. This inspired Alana to journey to Quietus and visit him in his Lighthouse. The group enjoyed the company for too long and soon saw Prince Robot IV come to visit so they hid in the attic.[1]

The Prince stayed in the house and spoke with him about his work and the rebels coming to see him. Heist claimed the book had no message and he only wrote it for money. Heist revealed to the Prince that he had a son, Parone, who volunteered to fight for Landfall but later committed suicide when returning from the war. The Prince called him a traitor and Heist pulled a gun on him but was shot in the knee. He claimed the gun was a prop.[2]

Suddenly, Gwendolyn broke in to the house to find Marko. When Heist made a sudden move, he was stabbed through the eye and skull with Gwen's sword.[3]

Retrieved from "https://imagecomics.fandom.com/wiki/D._Oswald_Heist_(Saga)?oldid=60234"
Community content is available under CC-BY-SA unless otherwise noted.