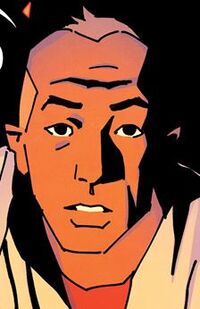 Things went south prety hard today. Got a lot I need to take care of, a lot I gotta do. And all this here? It's a start.

Dan Knossos was a one-time legend of wrestling known as 'Minotaur'. However, he didn't keep rights to his persona and spent all of his money, resulting in him living in a normal, if not jaded, lifestyle. Eventually, Dan took up a gig training rookie wrestlers in Japan.[1]

Dan moved back to the states when his friend Teddy called and said he was in urgent trouble. Dan met with Davis and Reynolds at a diner. He told the kid to save his money and make sure he kept his personal life up, or he would burn out.[1]

Later, Danny attempted to meet with Teddy at a bar. Teddy didn't show and instead a man named Eduard showed up. He told Danny he was Teddy's friend but lured him into an alley beat him with a wrench. He told Danny to head back to Japan and forget about Teddy. Danny then returned to his army friend, Amy's, house and picked up automatic weapons to fight back.[1] When she realized he wanted them for murder, she talked him out of using her guns and to head to the hospital instead to seek treatment.[2]

Later, Dan approached Terrance and asked him for advice on finding Eduard, who had him beaten earlier. Terrance told him to just look in the last place he saw him. Later, when Terrance returned to his office, he noticed his tazer had gone missing. Dan had stolen it and was walking towards the bar where Eduard had attacked him with the missing tazer.[2]

Retrieved from "https://imagecomics.fandom.com/wiki/Dan_Knossos_(Ringside)?oldid=53919"
Community content is available under CC-BY-SA unless otherwise noted.