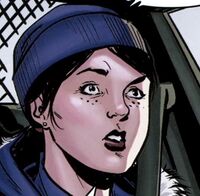 Dana Cypress is a police officer who was placed on the Revitalized Citizen Arbitration Team, a team dedicated to researching events related to people who have come back to life as Revivers.

Dana was sent out to Xiong Farm to investigate a case with a dead horse. She brought her sister, Em Cypress along to investigate the case. Arlene Dittman, a Reviver, was found in the barn pulling out her teeth and mumbling. When she suddenly turned on her daughter Terry Stankiewicz and murdered her, Em stepped in and was stabbed as well. When Em stood up after being stabbed through the chest, Dana was shocked to learn that her sister, Em, was secretly a Reviver. Em made her promise not to tell their father as Arlene’s body was carted off to the morgue after being murdered. Her father fired her from the RCAT for allowing Em, his favorite daughter and a civilian, onto the scene.[1]

As they left the scene, Em asked Dana to find out who originally killed her. Wanting to blow off steam, Dana headed to a local bar and flirted with a stranger, not knowing his job or name. As they hooked up in the car, Dana received a call and had to leave. Later, realizing the duress her sister was under and wanting to do anything to help her, she called her dad and pleaded to be let back onto the RCAT, as she'd do anything to protect her sister.[2]

Wayne Cypress called Dana to a meeting and put her back on RCAT. She was then introduced to her new partner, CDC researcher Ibrahaim Ramin, the man she was hooking up with at the bar the night before. Ramin then debriefed the squad that the Arlene Dittman research was a success. He believed that the Reviver strain wasn't contagious and wouldn’t spread. When they leave, Dana berates Ramin and tells him they will never work out.

Dana soon received orders to head to the Hines home. Justin Hine reported to the police that his step-sister, Jaime Hettinga had received threats made against her and her husband Rick Hettinga. Jaime had been covering the Reviver case as a newscaster and they feared someone was wanting to hurt those getting to close.[3]

Later, Dana received another RCAT call and was sent to the funeral home which had recently blown up due to Arlene Dittman going crazy and setting herself on fire. Her body was examined by Randy Decker the Mortician. He found she had burned not only on the outside, but the inside as well.[4]

Dana soon receives a call that Justin Hine had been murdered. She arrived at Justin Hine's murder scene. They found Jaime Hettinga's nighty in the trash outside implicating she was involved. The Feds soon arrived and questioned her involvement but she insisted RCAT was involved as Justin and Jaime’s father, Anders Hine was a Reviver. She called Ramin to find out why he isn't at the scene with him. Ramin picks up the phone and in turn warned her the CDC may relocate Revivers to a separate town.[5]

Dana headed to the house of Ann Moss, Ander’s nurse, to investigate Hine further. She asked if Ann noticed anything odd about Justin and Jaime and Ann said she saw nothing abnormal. Ann stepped away when they heard a knocking at the door. When Rick Hettinga tried to break in, Ann attempted to disable him but got knocked out. Dana burst into the room but took a shot of rock salt to the face. Rick yelled out that it was supposed to be between him and Anders to scare people. He pleaded with Dana that Anders was sick in the mind and a Reviver, he was just been faking being catatonic. When Dana turned to look at Anders, she was shocked to see him turn and look at him. In the distraction, Rick knocked Dana out.[6]

Later, Dana woke up and found Rick was dead. Dana now believed Anders had also had killed Justin. She postulated that he'd head after Jaime next and may be seeking his revenge for his murder as a Reviver of which Jaime and Justin may have been responsible.[7]

Dana grabbed fellow officer Brent Gunderson and arrived at Jaime's house. She spotted Anders in the attic and quickly climbed the roof. When she was held at gunpoint, she was saved by Brent who shot Anders in the head and his body fell of the roof. When they circled back to check on the body, Anders had escaped.[8] The next day, Sheriff Wayne delivered the news to the RCAT that they were going to focus on catering to the IRS who were investigating the Revivers and their tax return status instead of focusing on finding Anders.[9]

Dana pulls Ems phone records looking for clues as to who could have killed her. She sees she's dialed her school professor Aaron Weimar way too many times and becomes suspicious.[10]

Dana waited for Aaron Weimar outside of the University of Wisconsin. She approached him about hooking up with her sister but he denied it as he said she'd never accuse him of something so big without evidence. Dana stormed off upset.[11]

Dana later talks with Em about her phone calls with Aaron Weimar. She asks why she doesn't tell her the truth and they end in an argument with Em leaving in anger. She dropped Em off at her house to look after Cooper.[12]

Dana receives a sudden call from Ramin that he was at Edmund Holt's house and was trapped. She rushed over.[13] Upon arriving, they were both find and they took Ramin to the hospital who had stepped in one of Edmund's bear traps. At the hospital, Dana approached Wayne about why Ramin was sent to Edmund's alone. Wayne bit his tongue and told her they need to look after each other. The town was turning everyone crazy.[14] Dana heard the news of what happened to her son and rushed to see if he was ok. Cooper told her that Em saved him. Later, she was cleaning Cooper's room when she found a drawing that said sometimes Em was a hero, and other times she was a monster.[15]

Dana continued to dig into the case. She called Derek over since he knew her secret after the Checks brothers incident. She told Derek that Em was murdered and she was trying to figure out who did it. Em had told her she could only recall a feeling of fear and being chased. Dana told him the last time she saw Em was on Christmas Day. She had spent a long period of time texting Aaron Weimar. The next thing Em remembered was reviving in a river and the only clue she had was a scar on her forehead. Dana suspects Aaron killed her as a married man having an affair with a 19 year-old-girl. She asked Derek to stay late after his next art class and break into Weimar's office to look for evidence against him.[16]

Dana headed to meet with Em. She told her May Tao had been snooping around and was asking questions at Nikki's work. Em denied knowing her, though she had revealed she was a reviver to May already. Dana asked Em to start following May Tao and find out what she knew while her and Derek would head to the school to investigate Weimar.[17]

That night, Derek was about to sneak into Aaron's office when he ran into another masked man who was already in the office. He poured gasoline all over the office and set it on fire. Derek ran away screaming for Dana to abort over the phone. Dana quickly reacted and shot out the glass door to save him. The man pushed Derek into Dana and escaped while they tripped down the stairs. Dana fell onto glass shards. The two take off to pull the pieces out bit-by-bit so as to avoid heading to the hospital and getting caught.[18] Derek dropped Dana off at Wal-Mart so she could get some supplies. She told him she was going back after Weimar and needed him to return home to to watch Cooper.

Dana arrived too late to the Weimar's house, but Nithiya Weimar gave her access to track him on GPS. Dana tracked him to the Grist Mill. She ran into a storage shelf with thousands of teeth inside. She found nothing and left.

The next day she put the Grist Mill on her map as she continued her research of who killed Em. She realized the Mill was at the epicenter of the Quarantine Zone.[19]

Ramin helped receive U.S. Food and Drug Administration specialist Tony Chu to Wausau. Together they investigated a case where a group sneaked body parts into the quarantine zone. They investigated a restaurant that turned around to five-star quality food overnight. They uncovered the man had food powers allowing him to use a chopped of chef's hand to help him cook. Em Cypress helped take him down.[20]

Later, the group met up again when bodies were being exhumed from graves. They tracked the bodies to a one-room classroom on the southern tip of the quarantine zone. Inside, a woman Reviver was reliving her classroom days by ripping off her flesh and having the exhumed bodies revived. Tony had learned the secret of the Creeps and lured on to enter the woman's body causing her to self-immolate and burn the facility to the ground. The heroes escaped and headed to the local bar to drink and talk about their issues before Tony left town to head back to Philadelphia.[20]

Retrieved from "https://imagecomics.fandom.com/wiki/Dana_Cypress_(Revival)?oldid=45310"
Community content is available under CC-BY-SA unless otherwise noted.