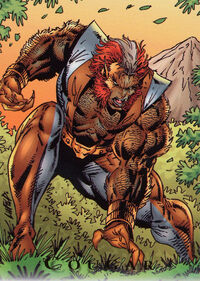 In 1967 the paleobotanist Megan Tsuchida was captured by the Jakarrans, while on an expedition in Zaire. While in captivity, she and one of her captors, king Khylund, fell in love and Daniel Tsuchida (aka Cougar) was borne. The birth of a half-breed was an offense to the Jakarrans, so Khylund and Megan had to escape. During the escape Khylund died ensuring the escape of Megan and Cougar. Megan returned to America where she raised Cougar. Later Cougar was offered a position in Youngblood which he accepted.