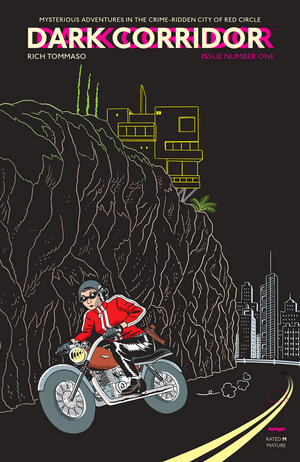 Appearing in "Part One, Animal Control"

Pete sits in his home in Red Circle when a dog appears at his window. He lets the dog in when he sees blood all over his body and face. As he cleans up the dog, he notices scratches but no major cuts, and he believes he may have been used for dog fighting. He has the dog jump in the back of his Chevy truck as they head into town to investigate.

He heads to South Bank, where the minorities and drug trades occur in town. He finds Joon and asks for him to look to see if he recognizes the dog. When Joon calls him Killer, the dog snaps and tries to attack him. Joon freaks out and tells him to scope out Chicano-Town.

As Pete takes him to Chicano-Town, aka Moroscoville, Killer jumps out the back of his truck and runs towards a home. Pete finds Frankie and Julie Scalina murdered in their home, previous members associated with the mob that he recognized. Pete walks into the home to call his security guard friend. He has him call Johnny and they can pick up jewelry and money from the house.

On the way, the security guard tells them he did 10 years in jail and was only released five weeks ago. As they arrive they begin discussing how to divvy up the loot. Johnny tells them he wants a gun, but Pete protests a thief wouldn't need it. He tells them he would as a hit-man. Killer barks at them from outside and Pete talks about wanting to take him home. He knows he can't as the Massina mob family would come for him when they found him with the Scalina's dog. As they leave, the Cowboy notices bit marks in Frankie Scalina's neck.

As they left, a dark-haired assassin woman arrives. She hugs Killer and tells her she's glad her boy is alright.


Appearing in "Greatest Hits, Volume One"

At a hospital, Ricci Salvatore is about to be put under for a medical procedure when Detectives Bludgeon and Cosh walk in and demand to ask him some questions about the previous night first. Ricci begins to call back to a murder he claims to have committed years ago.

He recalls going out on motorcycle rides at the same time as Dom Castella. He learned his routes and knew exactly when he would pass him. Then one day he blasted him in the face.

The Detectives urge him to tell them about tonight. Ricci tells them about being contacted recently to move some stolen jewels. As he was riding his motorcycle that night, a woman was about to pass him and then just like what he did with Dom Castella, she blasted him off the motorcycles. Except her shot wasn't fatal, she said she didn't want it to be quick as she took another shot and blew off his hand.

Ricci tells them the woman took the jewels and doesn't know where they are now. The doctor suddenly recalls that Ricci came in with a bag and hands it over to the detectives. They tells them they're going to turn the evidence in to make a case against the assassin but they laugh on their way out that they're going to use the loot for personal gain.

From the author of Clover Honey and 8 ½ Ghosts, RICH TOMMASO, comes an all-new ONGOING SERIES set in the fictional coastal city of RED CIRCLE—a city totally controlled by mobsters—who, after decades of wielding power, are silently being picked off oneby- one by unidentified female assassins. Like a Goodfellas script re imagined by Quentin Tarantino, this sprawling crime-adventure will keep you guessing and tuning in for more month after month!

Retrieved from "https://imagecomics.fandom.com/wiki/Dark_Corridor_Vol_1_1?oldid=68211"
Community content is available under CC-BY-SA unless otherwise noted.