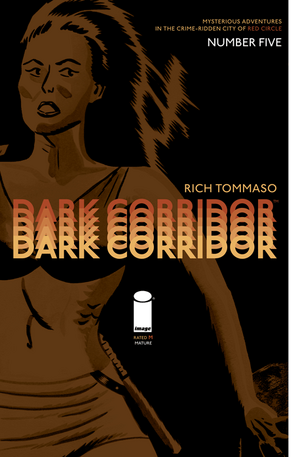 Pete and Mia Dorme track down their pursuer to a mansion. They find the woman is Nicole. He also spots Killer and begins to wonder if the dog was the one who killed Frankie Scalina and Julia Scalina.[1]

Rosemary Romero p;ants a bomb on a druglord she had been tracking. She recalls how he had killed her mother and father when she was a kid.

Pete and Mia Dorme arrive at the druglord's home to ask questions. However, the bomb goes off before they can enter. Pete is sick of dealing with the middle-men and decides to head straight for Massina and Santini.

Retrieved from "https://imagecomics.fandom.com/wiki/Dark_Corridor_Vol_1_5?oldid=51158"
Community content is available under CC-BY-SA unless otherwise noted.