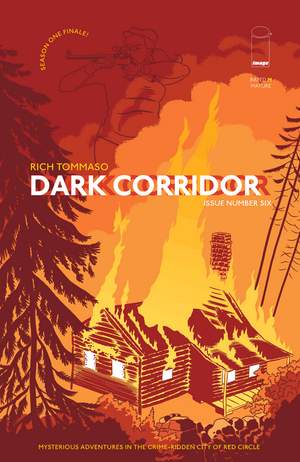 The Seven Deadly daughters call their contact to move drugs. However, Carter picks up the phone instead and promises to be their new mover.

Pete leads the rival drug bosses to the cabin with the seven deadly daughters. They launch grenades into the home and kill six of them while the seventh, Angie Vaccarrio, returns home late to see the cabin in flames.

A delay in plans proves catastrophic for the Seven Deadly Daughters.

Retrieved from "https://imagecomics.fandom.com/wiki/Dark_Corridor_Vol_1_6?oldid=54233"
Community content is available under CC-BY-SA unless otherwise noted.