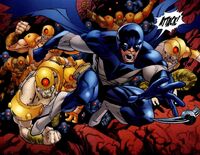 Darkwing II would crack under the immense pressure of the crime ridden city, Midnight City. He would lose control and begin killing anyone who committed a crime. Mark would come across this and would ask what happened. Darkwing attempts to lie, but Mark sees through it and Darkwing begins attacking him. They briefly battle with Darkwing unable to injure him. He decides to pull in into the Shadowverse. Mark refused to let him go and he surrendered. He would be taken into custody [1]

Darkwing II would be founded by Cecil Stedman and be reformed so that he can fight crime for the Guardians of the Globe. He saved the many Invincible universe heroes from Doc Seismic with the Global Defense Agency's Reanimen. Darkwing II easily defeats him by pulling him into the Shadowverse. Mark would strike him, calling him a "murderer." and would leave in anger [2]. Robot would defend him. After some of the previous Guardians realized that Mark was right, they left and Darkwing II would be added to the Guardians [3]. Darkwing II along with the other Guardians were defeated by the Mauler twins. After Oliver had killed them, Darkwing would start in shock along with the others [4]

Later, Invincible and a Gary Hampton (aka the Astounding Wolf-Man) would be on the run from Cecil Stedman, who sends in the Guardians of the Globe, including Darkwing II. Darkwing II calls Wolf-Man a murderer, to which Invincible replies "Look who's talking!" and that Darkwing II shoudl be "locked up for good". After a few more mintues of discussion, the Guardians of the Globe intend to attack the duo, but Invincible grabs the Immortal and swings him at his teammates, including Darkwing II. They are all knocked out. [5]

In the locker room at the Guardians of the Globe HQ, Black Samson stumbles upon Darkwing II and asks him if Shapesmith has returned from Art's shop, because they are supposed to train. A depressed Darkwing says that he has not seen him. Black Samson asks Darkwing if everything is okay, to which Darkwing replies that killing people changed him and that he will never be the same again. Despite Black Samson's falling out with the original Guardians after his brief power loss, Darkwing II as Night Boy always looked up to them. Darkwing II really believed that the things he did after Darkwing I died were right at the time, and that they were necessary to regain some kind of control over the crime in that place. Darkwing II knows that the Immortal and Black Samson can tell that he is not the same kid that ran around as Night Boy, that they can see he is different. Darkwing II starts to think that maybe Invincible is right about what he said last time. Black Samson convinces him that anyone would crack if they spent too much time in Mindnight City, and that he and the Immortal look at him different because he is a man now, a man they're glad to fight shoulder-to-shoulder with, and a man who's earned the name of Darkwing. A speechless Darkwing II finally mutters a thank you. [6]

Darkwing II would be defeated along with the other Guardians and be overwhelmed by the evil Mark. He used the last bit of his strength and bring him into the Shadowverse. Because Darkwing II neither the evil Mark emerged, they are both likely died, meaning that he sacrificed himself so that the others can live [7]

In a shocking turn of events, over a decade after his supposed death, Darkwing II was revealed to have survived in the Shadowverse somehow, and was rescued by the Guardians of the Globe.[8]

Retrieved from "https://imagecomics.fandom.com/wiki/Darkwing_II?oldid=63673"
Community content is available under CC-BY-SA unless otherwise noted.