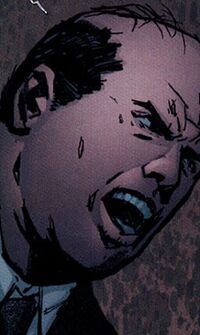 When they received a tip from Sam Burke on the JDK's location, Hunt and Unger sneaked up on Sam and held him at gunpoint outside the JDK's house. Sam tells Unger that Hunt was with the killer. He pointed out the voicemail tip he left never said the address but somehow Hunt knew where to take them. He also noticed Hunt wasn't using his regular gun. When Unger saw the peculiarities he asked Hunt to switch guns with him. Hunt quickly turned and fired at Unger, killing him.

Hunt chased Sam through the forest but was killed by Kirk McGuire who arrived to clear his name of charges of being associated with the JDK.[1]

Retrieved from "https://imagecomics.fandom.com/wiki/Dave_Hunt?oldid=39582"
Community content is available under CC-BY-SA unless otherwise noted.