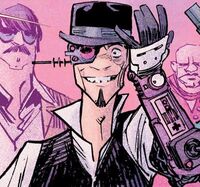 Davey Trauma is a high-end Nanopac dealer in Los Angeles in the year 2089. He possess the ability to hack anyone's mind since everyone has become addicted to juicing on technology. Constable Led Dent and his wife, Decay, hunted Davey Trauma and eventually knocked him out to turn him in.[1]

Later, Led Dent and his wife were sent to Tokyo to bring down their EMP shield by the Flak Corporation.[2] Led quit drugs for a while but eventually needed to jack-in again when he was near death due to injuries. Davey Trauma appeared on the screen and told him that the Flak corporation wanted results on his mission.[3] He took control of Led and had him set of a bomb in the center of the Japanese village that had been taking care of him.[4]

Retrieved from "https://imagecomics.fandom.com/wiki/Davey_Trauma_(Tokyo_Ghost)?oldid=54863"
Community content is available under CC-BY-SA unless otherwise noted.