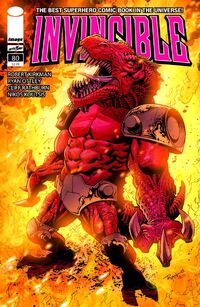 Dinosaurus stopped Invincible (Mark Grayson) from fixing the destruction of the cities destroyed in the Invincible War. Dinosaurus argued that Invincible fixing the cities meant that the economy wouldn't go into superdrive because their abilities allow them to rebuild. Mark easily defeated Dinosaurus, reverting him back to his human form. Mark questioned whether he would kill him or not. The Guardians arrived and took him into custody.

After Mark arrived from fighting in the Viltrumite War, Dinosaurus escaped and built bombs to destroy Las Vegas. Invincible headed out to stop him. He asked him to help evacuate the city. Mark managed to stop one of the bombs, but the city was vaporized into glass.

David escaped and turned himself into the custody of the Pentagon. David revealed his Dinosaurus transformation was achieved when he stopped caring about topics and that he must be entertained in order to prevent his transformation. He was provided with accommodations and he was surprised by the shock of Mark attempting to free him. Mark told him his origin story and how he received his powers, and he transformed into Dinosaurus. Mark also revealed he was right about Las Vegas's destruction. Cecil found out about it and sent the Reanimen to attack them. Mark flew him out and they headed to Dinosaurus's base to start their new partnership.

Teaming Up With Invincible

Their first mission together would be to stop the villain Omnipotus after he defeated the Guardians of The Globe. While he battles Mark, Dinosaurus bites his head and unleashes a large surge of energy, killing Omnipotus. The Guardians recover and attempt to arrest the duo. Mark flies Dinosaurus back to his base. After Mark was infected with the Scourge Virus, he is visited by Allen the Alien, mistaking Allen for an enemy. He tells him of his friendship with Mark and he lets him go. Dinosaurus apologizes that his alien appearance startled him. Allen comments on how he reminds him of the Ragnar. Allen flies him to the Viltrumite warship, believing Dinosaurus could breath in space. Allen apologizes for the misunderstanding. The Guardians readies themselves, but Dinosaurus argues that he can help Mark with his illness. He manages to get Thragg to allow him to study one of the Viltrumite labs. Dinosaurus uses his genius to get access to Thragg's personal quarters, shocking Thragg. Dinosaurus asks for the scientist studying Mark but Thragg sasy he is "unavailable". Dinosaurus would see Thragg attempt to kill Mark. He attacks Thragg, but his claws break because of Thragg's vast invulnerability. Dinosaurus reveals that he set the ship to explode according to his heart rate. Thragg would pummel him and would hear another explosion. He goes to see it, but Dinosaurus bites him, shattering his teeth in the process. Thragg breaks his jaw and heads to see the damage. Dinosaurus uses the opportunity to escape with Mark. Dinosaurus reverts back to David Anders and heals himself. He reveals to Mark that Thragg attempted to kill him. Zandale Randolph rushes to attack Dinosaurus, believing him to hold Mark captive. Mark's brother attacks next along with Allen. Mark attacks Allen and screams after breaking his arm.

While Mark was recovering from his injuries, Dinosaurus had set up a bomb in Los Angeles and Greenland. Mark would visit Dinosaurus and learn of his bomb in Los Angeles. He heads to Los Angeles and gets the Guardians to deactivate it. Dinosaurus teleports there and Mark confronts him. Mark calls him insane and Dinosaurus states that Los Angeles was a distraction. He asks Mark to take a larger look and reveals he detonated a bomb in Greenland to flood the major cities around the world. Mark would then battle Dinosaurus, and Mark says that Dinosaurus must die for the sake of humanity. Dinosaurus capatilizes on Mark's inner ear weakness and plays a frequency, knocking him into a coma. He then trades his place with a lifeless clone of Mark and kills the clone for the whole world to see. Dinosaurus then pulls away back to his base. Dinosaurus would explain to Mark how he was able to get to his base and make it appear that he was killed. Mark explains that Dinosaurus caused a disaster on a "maybe" and Dinosaurus realizes that he is right. Mark then asks Dinosaurus for help in fixing his problem. Dinosaurus refuses, saying that this will be his final act and asks Mark to kill him. Mark kills him and marks his corpse with his thumb so Cecil would not fake his death like he did Conquest.

Retrieved from "https://imagecomics.fandom.com/wiki/David_Anders?oldid=67142"
Community content is available under CC-BY-SA unless otherwise noted.