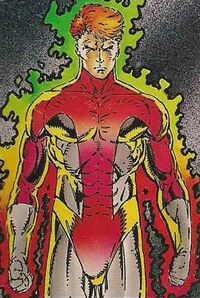 Psi-Fire was a member of Youngblood. During a mission in a foreign country, he reached dictator Hassan Kussein and used his powers to kill him, stating that he could do it from the USA but liked to do things personally. Due to this murder against orders, Psi-Fire was forced to use an inhibitor. When the Youngblood faced Darkthornn's forces, Psi-Fire's inhibitor was removed and he drove Darkthorn away.

The fight against Darkthornn left Psi-Fire comatose, until he transferred his mind to a female medical staff member. Psi-Fire attacked Youngblood until he/she tried to use his powers against Masada, but since Masada's powers come from several souls, it overwhelmed Psi-Fire.

Retrieved from "https://imagecomics.fandom.com/wiki/David_Waller?oldid=65480"
Community content is available under CC-BY-SA unless otherwise noted.