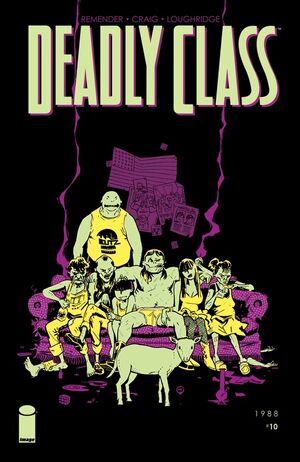 Marcus wakes up next to Saya. He realizes he's two hours late to the big comic book sale and rushes to put his clothes and dash across town. He is hungover and sick as he runs. He pukes along the way without stopping and even grabs a man's burger to eat as he continues to sprint across town. Marcus thinks about how Blaine trusts him and he doesn't want to cross him.

Marcus has an acid flashback and believes he he said, "I love you" to Saya the night before.

Upon arriving at Lost Innocence Comics, many patrons are angrily awaiting to be let in to purchase their comics. He let's them in and sits behind the counter with a hangover. A small regular, Mike, pesters Marcus about drawing him a picture as Marcus promised he would. Marcus continues to answer questions about the quality of various comics and is frustrated with everything.

Marcus feels a rumbling in his stomach. He gets the idea to fart on Mike. When he shifts his wait to rip on in his face he craps his pants. He runs to the store as patrons smell the awful stench. In the bathroom he runs water over his stained clothes and doesn't have anything to wipe his body. He sees Blaine's bowling shirt and grabs it to wipe his rear. Blaine walks into the bathroom to see Marcus and instantly berates him in anger and throws him out of the shop.

Outside, Willie, Maria, Saya, Billy, and Lex meet Marcus and tell him it's time to run the hit.

At night, they stake out Tenderloin where the review their plan to have Lex drop a bomb off at the front door, Billy leave a bomb at the second door, and time their entry into the building. Once the plan starts, they bust into the building and no one is there. They panic and Saya confirms she saw them enter.

From the shadows and hidden crevasse, Jimmy John pops out grabbing Lex, and they realize it was a setup. They flip over couches as gun shots fill the air and F-face raises his automatic rifle at them.

In another room, Sue Ann knocks Saya down with her bat and mounts her to kill her. She sees Maria enter the window expecting her to save her instantly. Instead, she stands over Saya and asks her if she slept with Marcus.

Retrieved from "https://imagecomics.fandom.com/wiki/Deadly_Class_Vol_1_10?oldid=43740"
Community content is available under CC-BY-SA unless otherwise noted.