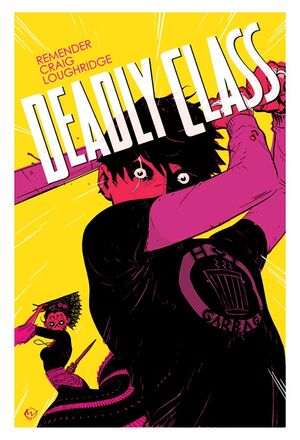 Saya is pinned by Sue Ann with a sword to her throat. Maria continues to watch and not help to get back at Saya for sleeping with Marcus.[1]

Outside as Billy tries to blow the back door per the plan, he's shocked to see the door still standing after the explosion.

Upstairs, F-face and his crew lay down suppressive fire on Marcus and Willie. F-face yells out how he reinforced the downstairs entrance to keep his friends out. Marcus and Willie are pinned down behind a tipped refrigerator.

Sara manages to knock off Sue Ann and stab her in the throat with a sai. Enraged that Maria was going to leave her to die, Saya and Maria enter scuffle over Marcus. While they are distracted, Gran Gran attacks Maria, stabbing her in the arm with a pitchform and pushing her into the bathroom.

Jimmy John and Cousin Jim lay on the ground after the bomb went off. Lex and Marcus kick open the fridge door that they hid in while setting off the bomb. Marcus tells Lex to cover him as he chases F-face into the basement. Lex yells out its a trap and Marcus yells back that he knows.

In the bathroom, as Maria battles Gran Gran she thinks about how she needs someone to hate. She would have killed Chico anyways and just used Marcus as a reason to do it. Maria stabs Gran Gran through the skull with the pitchfork killing her. A large man runs into the bathroom attacking Maria for killing Gran Gran.

In the basement, Marcus walks around the pitch dark basement with a flashlight and handgun searching for F-face. He's scarred by a barking dog in a cage he didn't see when he suddenly sees Mrs. Rank. She's tied up and dressed as a pig. When she's visibly excited for Marcus to die, Marcus dodges out of the way as F-face was behind him and fires a shotgun blast. Mrs. Rank dies in the crossfire as F-face rejoices in getting to share the experience of killing her with Marcus since they were both tortured by her.[2]

Upstairs as Maria is being strangled by Portly, Saya saves her by ramming her sword through his chest. Without slowing down, he turns his rage on Saya knocking her around. Billy finally makes his way through a window by scaling the window and shoots Portly in the head to finally knock him out of commission.

Police arrive outside the building from calls about the explosions.

In the basement, F-face hunts Marcus in the dark. His gun shots have a small flare that briefly lights up the room to see whats around him. Suddenly, his dog that scared Marcus earlier leaps out of his cage and kills F-face.

Marcus heads up stairs and grabs Chico's bandana and severed head. He runs into Maria. They briefly exchange words about their relationship. When Marcus tells her he didn't want to put her in this situation, Maria tells him she'll never have to worry about her again. As they leave through the back as Lex distracts officers in the front of the building, El Alma del Diablo is outside waiting. He was about to ask if they saw Chico but then he sees Marcus holding his severed head standing next to Maria.

Retrieved from "https://imagecomics.fandom.com/wiki/Deadly_Class_Vol_1_11?oldid=43741"
Community content is available under CC-BY-SA unless otherwise noted.