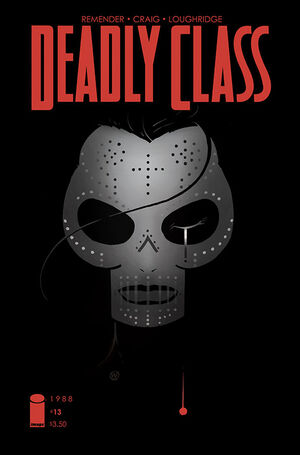 Willie flies through the streets towards Marcus and Maria's direction. He spots the fire on the bridge and sees Marcus is about to be knocked off the bridge to his death.[1] He hits the gas on his garbage truck and times his trajectory to catch Marcus in the back of his truck, saving his life.

Meanwhile, El Alma del Diablo takes off with Pale Face and his Right Hand Man, carrying Maria en tote. He caresses the decapitated head of his son and tells Maria he's going to make her pay. Slowly over time he plans to torture her. Maria drops a smoke pellet distracting everyone in the car and causing a massive crash. As Pale Face pulls himself from the wreckage, Maria tells him she will repay him in kind for burning her pregnant mother alive. She raises her fans on fire and swipes them through gasoline igniting the vehicle and man in a massive fire.

She is suddenly caught off-guard by El Alma's Right Hand Man. She pulls more fans out of her back and stabs the man through the neck. As he releases her from shock, she cuts off his head and turns her gaze towards El Alma who has taken off towards a boxing facility. She chases him through the lot and is caught off-guard when El Alma appears behind her and holds a gun to her head.

Marcus and Willie attempt to catch up with the wreckage and save their friend. They hear two gun shots in the distance. As they push themselves faster, they turn the corner and find El Alma murdered and Maria exhausted and in shock from finally achieving her goal.

Later, they sneak back into the King's Dominion Atelier of the Deadly Arts. Maria helps them get in unnoticed as they discuss Master Lin's potential harsh penalties for escaping and unauthorized killing. Marcus kisses Maria in the moment and Saya watches them, unnoticed, from a distance. Maria tells them she needs to tie up some loose ends with Lex's death with Master Lin and she'll meet them later.

In Master Lin's office, Maria meets with him and begins fabricating a story about Lex running off and hunting a serial killer to build his school credit. However, she becomes woozy as she realizes she's been poisoned. Amante Jael walks in and asks if, "it's done?" Master Lin informs her that the punishment fit the crime. 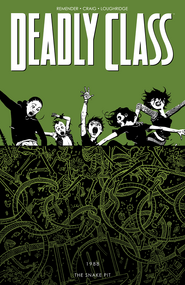 Retrieved from "https://imagecomics.fandom.com/wiki/Deadly_Class_Vol_1_13?oldid=45356"
Community content is available under CC-BY-SA unless otherwise noted.