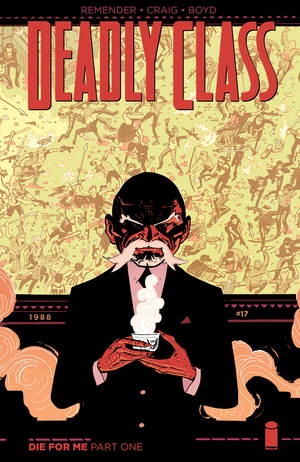 People are nice to each other to the degree that they need each other.

Master Lin has just announced the final exam is hunting and killing all rats. Marcus flees through the halls as a rat and knows his life is in danger.

The Soto Vatos yell out for revenge for Maria and El Alma del Diablo. As Marcus avoids their deadly strikes, he's surprised they even know about her and el Diablo. As he escapes from them, he suddenly finds himself pursued by the Death Spirit Squad. He grabs Petra as they both escape from the attacks from their peers. They duck into a janitor closet as the door is continually battered as their classmates attempt to break in.

Elsewhere, Shabnam makes a proposal to Victor to team up. He tells him he has the dirt on all the rats and knows how to kill them. He needs Victor to be the brawn as a intelligence in military arrangement. Victor smiles and agrees as he accepts a large automatic weapon from Shabnam as a token of their new bond.

Marcus and Petra frantically discuss what to do next as the door is being beat down. Petra begins concocting a mixture of chemicals. As the Quarterback, Durp Flumpdunger, attempts to break down the door, Marcus opens it and he flies into the room. He runs into a mixture and Petra throws more on the cheerleaders. Their skin burns and they begin puking as Petra tells them her specialty is Toxicology.

In the bathroom, Billy saves a woman from her boyfriend but is surprised when she turns on him as she didn't want her boyfriend to die. Saya and Willie break into the bathroom and save Billy from the girl. They offer a chance for him to come with them even though he is a rat. At the same time, Marcus and Petra run by and tell Billy to come with them. Billy decides to head with them as it's safer for a rat to hang out with his own kind.

Shabnam begins recruiting other members to their cause. As he gives a lecture on their plan of attack, several of Willie's gang-banger friends walk in. He tells them they could take out Willie for giving them a bad wrap and they agree to temporarily help him out.

Retrieved from "https://imagecomics.fandom.com/wiki/Deadly_Class_Vol_1_17?oldid=53527"
Community content is available under CC-BY-SA unless otherwise noted.