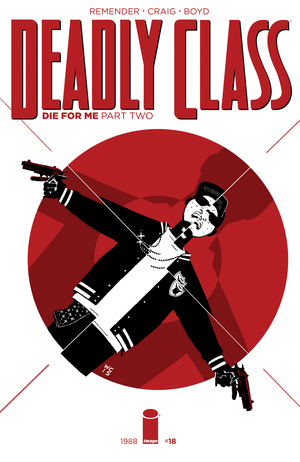 That's the right of people in power -- taking credit for the labors of subordinates.

Marcus Lopez Arguello, Billy, and Petra attempt to flee from the school as they are pursued by their classmates for being rats. A boy named Paulie approaches them and asks to run with them. No one recognizes him though he pleas he's been around. They decide to bring him along for strength in numbers.

Victor has Marcus in his sniper rifle's sights in the distance. He decides to let him go so that he may hunt him rather than give him a clean death.

Elsewhere, Shabnam surveys the school grounds that are now littered with students bodies. He thinks about how good he's done to get this far. Kendal enters the room and makes a joke about Shabnam being a pig. Shabnam immediately responds remarking how Kendal's father was in the CIA who had killed 11 women and children. Kendal never excepted how dirty his father had become and pulled a knife on Shabnam. However, Shabnam revealed that he had been following him for weeks. He knew all about his homosexual lover, Stephen, and had photos taken of him as blackmail. He then reveals he broke into a safe and took love letters between the two as well. He tells Kendal that if anything happens to him the letters and pictures will be released. Kendal realizes he's at his mercy and asks what he wants. Shabnam tells him the Stephen is rat, and his homework is to kill him.

Elsewhere, Saya and Willie Lewis attempt to flee from Willie's old gang. They back into a library and Saya promises to protect him and knows he probably won't be able to pull the trigger on the gun. Willie finally reveals the truth, he's not afraid to kill, he's afraid he'll kill his loved ones. He explains it wasn't his uncle that saved him when he was little. The gang that broke into his house caused him to grab and gun and spray wildly, accidentally murdering his father in the process. Saya jumped out to attack the gang. However, she was disarmed. When she was about to be killed, Willie came to the rescue and killed her attackers. He reproached her and said she had plenty of time to grab the sword. He knew she was testing him.

The two are called into the principals' office. Master Lin tells them they must kill Marcus and his gang as their assignment.

The Freshman Finals killing spree spills into the streets of San Francisco.

Retrieved from "https://imagecomics.fandom.com/wiki/Deadly_Class_Vol_1_18?oldid=54949"
Community content is available under CC-BY-SA unless otherwise noted.